A production facility with a Capacity of over 60.000t

The 600 kg Big Bags Quaterna® Terra stand in a row on the concrete under the roof of the production hall. We are more than 400 km away from Lioujas, where SOBAC is located in Averyron. Here in Bourré the production takes place, which at the moment is intended only for the farmers. In 2007, the FUTURAGRI factory, a subsidiary of SOBAC, opened its new production facility to meet the ever-increasing demand for Quaterna®. The production volume increases by 30 % annually.

On the hills of Bourré, in the department Loir and Cher in central France, where formerly a champion factory was on the edge of the state forest of Montrichard, are working today the managers of SOBAC and the production director.

The production manager monitors the current production of 40,000 tons. If the second press is active, a production of 60,000 t is possible. Seven employees work full-time at the factory in Bourré.

In the production hall is a huge compost heap, which is mixed with the vegetable and mineral raw materials. That is of course the essence, the “Bozoulais”. This is the “core” invented by Marcel Mézy and well protected by the head of production: The Bozoulais is the active material. It is the premix that comes from Marcel Mezy’s Aveyron plant and is mixed here with the other components.

The height of the four-storey production facility allows the mixing and granulation of the products to be ensured before they are filled into the 600 kg big bags through a huge funnel.

Bactériosol® Jardin (product for the garden) has also been produced here since January 2009. 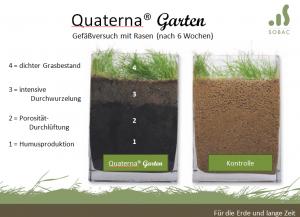